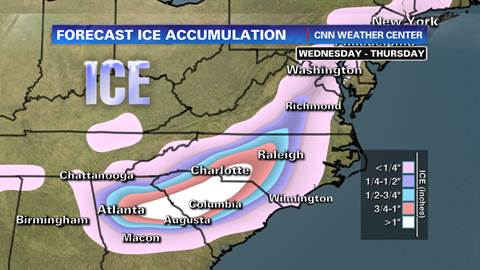 by Jason.Hanna
The U.S. Southeast is in the thick of a major ice storm -- part of a system the National Weather Service has called "potentially catastrophic."
The Piedmont area of North Carolina appears to be bearing the brunt of the storm's effects after temperatures dropped rapidly at mid-day and snow began falling at a furious pace.
The gridlocked interstates clogged with abandoned cars and commuters trying to make their way home is drawing comparisons to the weather debacle that happened in Atlanta just two weeks ago.
Ten people are dead across five states as a result of the storm.
The system is expected to continue up the East Coast and drop heavy snow in parts of the Mid-Atlantic on Wednesday and Thursday, and the Northeast on Thursday and Friday.Follow this blog for a roundup of the latest news and a close-up provided by those experiencing the weather.
3rd & 7 37yd
3rd & 7 37yd
B
S
O
close
close